Japan’s extensive rail network makes traveling there simple. The electric Shinkansen train makes traveling fast! Today on our trip from Kyoto to Hiroshima I used the Gaia GPS app to clock the train at 172.7mph. Once again showing that electric transportation is optimal. 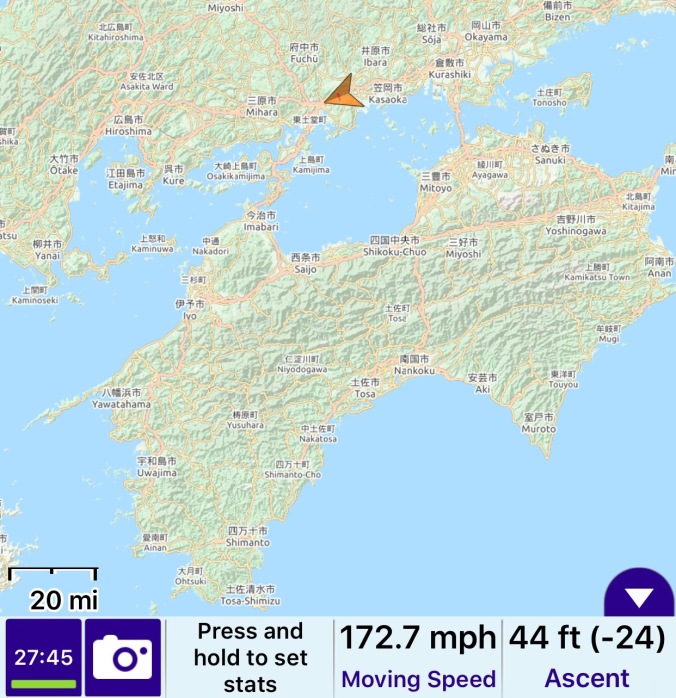 In 1995 Rosemary and I took the Shinkansen from Tokyo to Kyoto. She swears she has a photo of that digitized on her computer somewhere but she can’t find it. Here she is today in the Kyoto station ready to board the Nozomi “Super Express” line to Hiroshima. 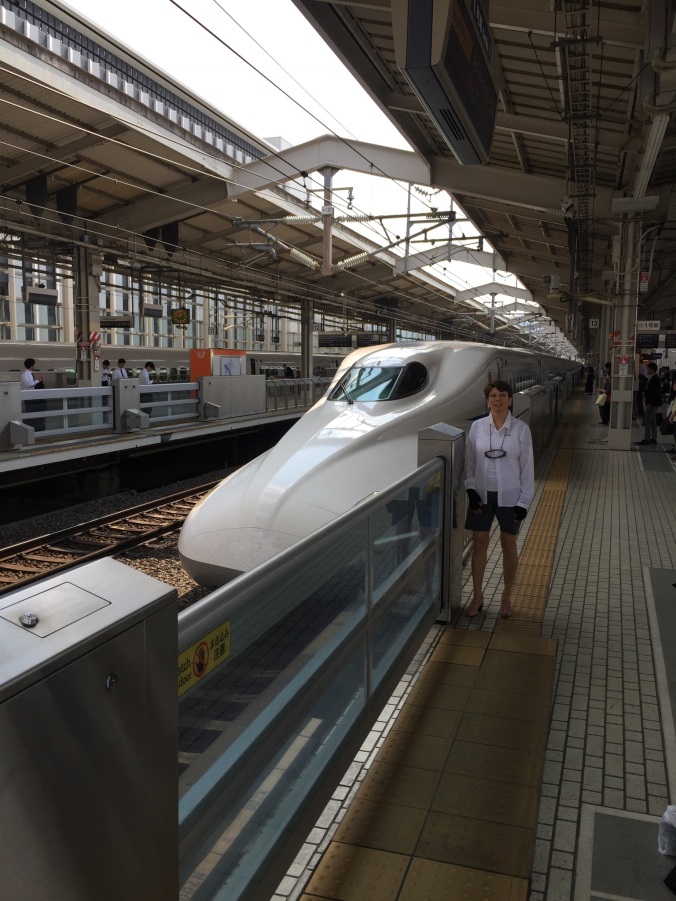 Japan continues to upgrade and modernize its Shinkansen trains, and the N700 model train we rode in today — with a maximum speed capability of 186mph —  looks very different from the train we rode in 1995. This train can tilt by 1 degree on curves to enable it to maintain as much speed as possible. The acceleration and deceleration is so smooth that you can easily walk around the car while the train is changing speed.

I was impressed with the automatically opening/closing doors that worked flawlessly as I walked between cars. The car interiors are a lot nicer: even in the standard class “blue cars” there is plenty of legroom and the seats recline quite a bit. 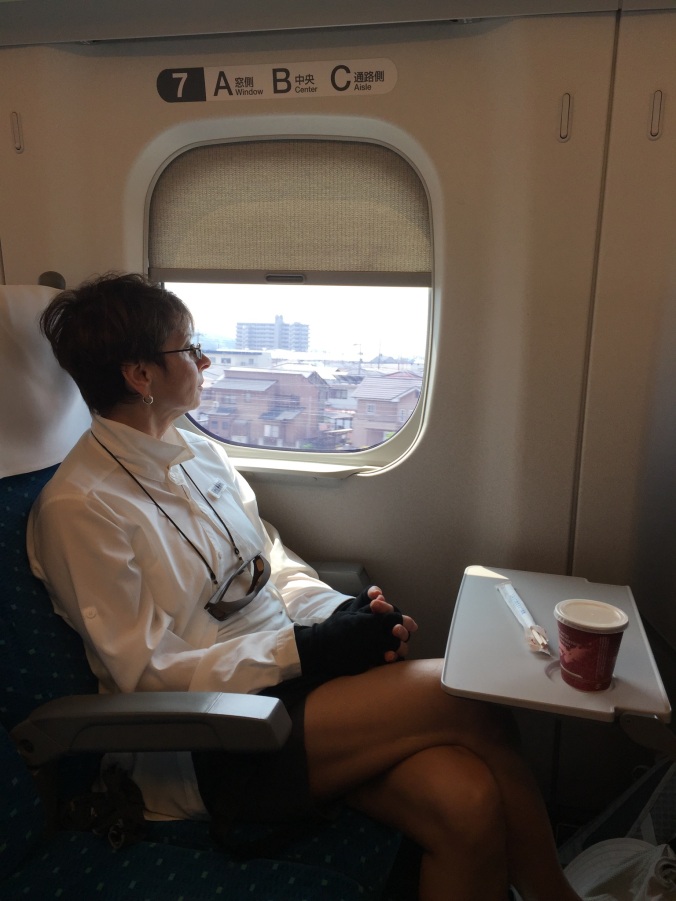 The Shinkansen has a remarkable safety record: after over 50 years of service carrying over 10 billion passengers, there have been zero passenger fatalities due to derailments or collisions. This in a country that regularly experiences massive earthquakes!

Searching the web for photos of the cockpit, I found this one (Photo copyright toretabi.com)

Japan Railways continues to develop new train designs that can safely go just a bit faster. The latest to go into service is the E5 series, introduced in March 2016, which is capable of 200mph and currently operates on the Tokyo to Shin-Amori line in northern Honshu. Talk about a “silver bullet”! (Photo copyright cuso4.org) 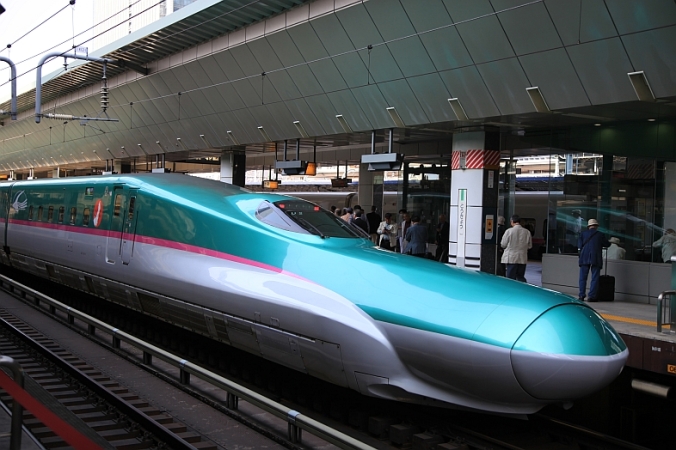 But the E5 train is slow compared to the new maglev (magnetic levitation) train for the long planned Chuo Shinkansen between Tokyo and Osaka that Japan has been testing on a track in Yamanashi Prefecture. It has achieved a speed of 323mph. (Photo copyright nippon.com)

As I learned more about the history of the Shinkansen and the planned improvements, I wondered if the new maglev Chuo Shinkansen line would ever be built. The cost is enormous, Japanese government debt is at 200% of GDP, and the population is projected to decline to around 100 million people in 2050 (currently it is less than 127 million).

Today the Shinkansen time for the Tokyo to Osaka route is 150 minutes. The planned Chuo Shinkansen line could reduce that to as little as 70 minutes not only because of the increased speed but because the route would be more direct (86% through tunnels). Is it worth it? I’m not sure, and there is an ongoing debate about the desirability of the new train.

If you believe Elon Musk, a superior mode of high speed ground transport is his Hyperloop proposal (it is quite detailed and a fascinating read). The basic concept is an enclosed tube containing passenger cars riding on air bearings (almost frictionless) and driven by linear induction electric motors powered by sustainable energy (of course, this is Elon Musk we are talking about). The key elements are that the tube environment is low pressure to reduce air resistance and at the front of the train is a compressor fan to transfer the higher pressure air from the front to the rear of the train. (Graphics courtesy of spacex.com)

How fast will a hyperloop go? Think up to 700mph. Close to the speed of sound. There are already multiple companies that have been formed with the intent of commercializing Elon Musk’s proposal (which he has offered free of charge) and that are building test tracks, like Hyperloop One. They believe this technology can be made real and at far less cost than a maglev train or even current high speed trains like the one that is starting construction in California which will have a maximum speed of just 220mph. Slow.

Next post about our Kyoto trip >>> Hiroshima: Never Again 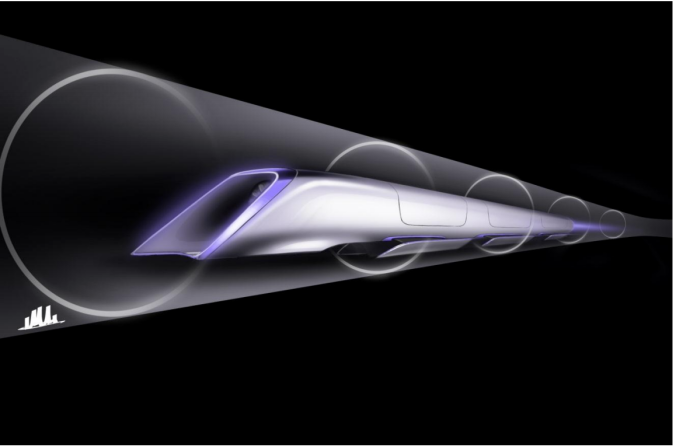 2 thoughts on “Riding the Shinkansen at 172.7mph — Will the Future be Faster?”