That is the message of the Hiroshima Peace Memorial Museum, located less than a mile from the site of the first of what is so far only two instances of nuclear weapons used in combat. At 8:16AM on August 6, 1945, an atomic bomb was detonated at about 1,900 ft and almost directly over the Hiroshima Prefectural Industrial Promotion Hall next to the Motoyasu-gawa River.

The horror of that bombing cannot be measured only in lives lost. The American Air Force had been bombing Japanese cities for many months already, and far more Japanese, many of them civilians, had died in those attacks than died from both the Hiroshima and Nagasaki atomic bombs.

No, there was something fundamentally different about a single bomb that could produce not only such an instantaneous massive level of destruction and death but whose aftereffects in terms of radiation could double the number of casualties. A single bomb whose explosive power came from the nuclear fission of only a tiny fraction of all the fissionable material it carried inside it — the original design was very inefficient at converting mass to energy — meaning that future designs would be made vastly more powerful.

We took the Shinkansen train to Hiroshima to visit the “A-Dome” and the museum. I found the experience an extremely emotional one. The bombing occurred less than a decade before I was born. There are still people alive today who were in Hiroshima on August 6, 1945.

It would be easy to misread the message of the museum as “See what the Americans did to us.” Easy not because the exhibit explicitly, or even implicitly, seeks to convey that meaning. Easy because one can assume that would be the reaction of the Japanese people to the event. But that is not the message the museum tries to convey. Instead the message is “Never again must this be allowed to happen, anywhere.”

I found that message a hopeful one because it is not about seeking revenge or assigning blame: it encompasses all of humanity and wishes everyone well.

Maybe that message is overly optimistic. Maybe it is even delusional now that the number of countries with nuclear weapons has gone from just two when I was born to nine in total. But the number of individual weapons has declined dramatically from the height of the Cold War — from about 68,000 to about 14,900 today — and  the Partial Test Ban Treaty limiting nuclear weapon testing to underground sites has held. And so far there have been no further nuclear weapon explosions in combat.

The Hiroshima Prefectural Industrial Promotion Hall before the war, and just after the bombing. 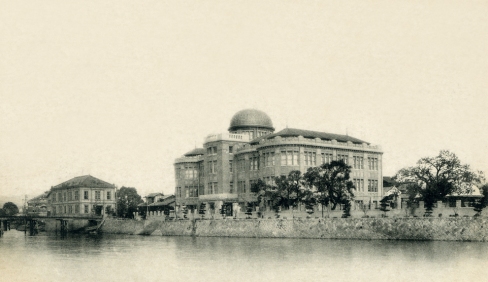 Below is the A-Dome as it appears today. It remains in essentially the same condition as it was on August 7, 1945, except for some steel reinforcement to prevent the structure from collapsing any further. But for a few bridges, everything else you see in the central area of Hiroshima was built after the war ended. 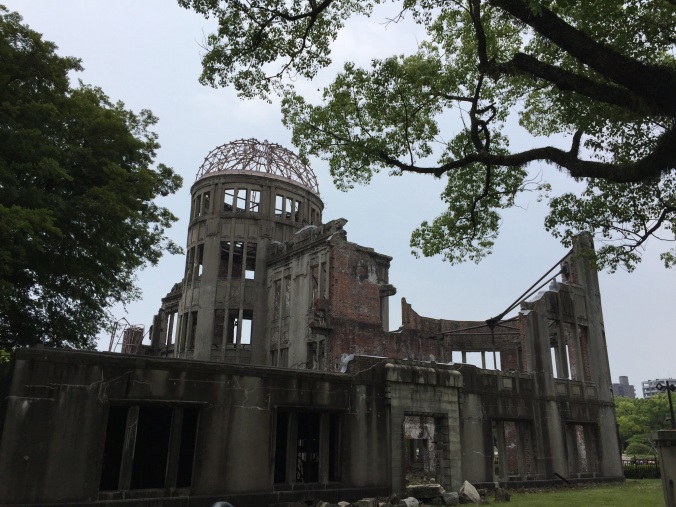 At the A-Dome I was struck with how most people kept their voices low, simply reading and looking. One Japanese woman (in the hat at lower right) was asking people to sign a petition to the US to ban all nuclear weapons. That won’t happen in my lifetime. But I signed the petition. Because it needs to happen, some day. 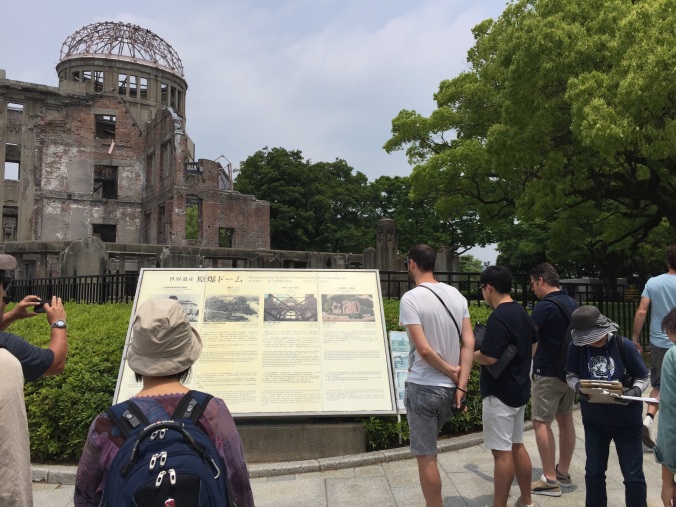 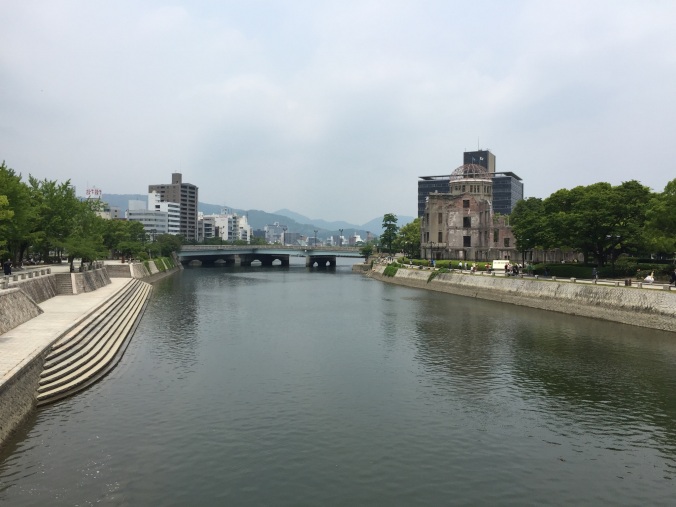 Touring the museum, I was struck by how rapidly the city, and Japan in general, was rebuilt once the war was over. The Japanese people have an extraordinary cultural cohesion which provides them with a remarkable energy and unity of purpose. In just over three decades, Japan went from an impoverished country ruined by war to having the second largest economy in the world in 1978: only the US had a larger economy. And at that time Japan a population of only 117 million compared to the US population of 223 million. Today, with a population of just 126 million Japan is still the third largest economy in the world.

Japan now faces many challenges: a declining population with an increasing percentage of retirees, a daunting level of government debt (more than 200% of GDP), a traditional resistance to female equality in the workplace, an unwillingness to accept immigrants, and a heavy reliance on imported fossil fuels and other raw materials critical to an industrialized economy.

But I would not count Japan out. It has met fearsome challenges in the 20th century and surmounted them. It may well prove up to the challenges of the 21st century.

These photos are of the Hiroshima Peace Memorial Park. School children are taken on class trips here, and each class sings a song together at the Children’s Peace Monument Statue. Then they tour the museum nearby. More hope.

The school children are so well behaved. 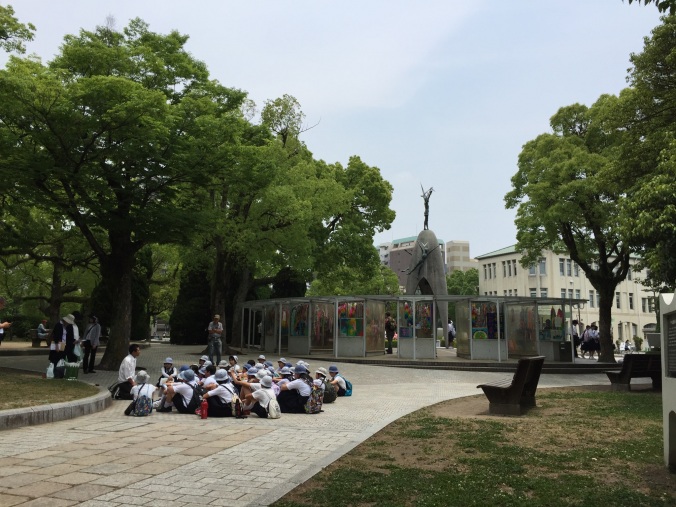 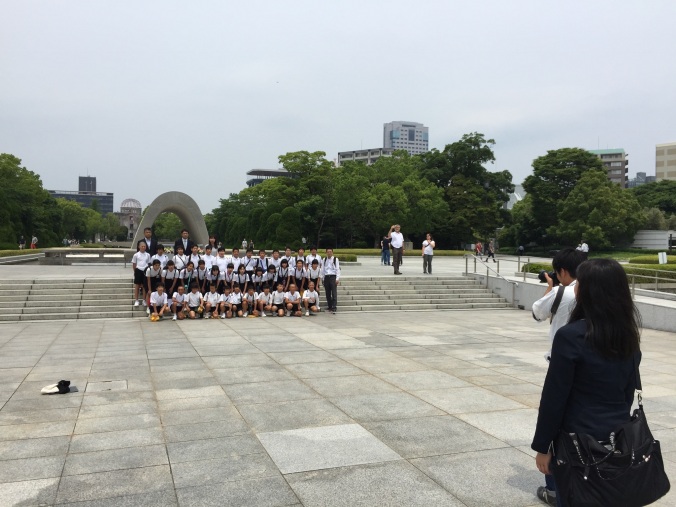 Next post about our Kyoto trip >>> Hiroshima: Never Again

One thought on “Hiroshima: Never Again”