New Zealand is an extraordinary place. I’ve travelled to 49 countries, so I can claim some modest level of perspective and personal experience to support that statement. I’ve lived most of my life in the United States, but have also spent years in Singapore and Toronto, Canada.

To close out my series of posts about our three weeks on the North Island, here is my list of what I like about New Zealand, from the most fundamental to the “Oh that’s nice” experiences. And to provide a contrast, some comments about how the US compares.

Fewer guns per 100 residents: New Zealand 22.6, US 88.8 (Reference), meaning there are more guns in the US than there are adults. (Reference) That is insane.

More effective gun laws: in New Zealand they are focused more on vetting the individual applying for a firearms license (this is done by the police and can be revoked at any time) and “protection” or “self-defense” are not valid reasons for being granted a license (Reference). Formal gun safety training programs are mandatory before a firearms license is issued. Semi-automatic weapons were recently banned and a gun buyback program is currently underway. In contrast, in the US almost anyone can purchase a gun, including semi-automatic weapons, and no reason has to be provided. No gun safety training is required to buy a weapon which can be used to kill other people. Which strikes me as insane. No other developed country makes it as easy to buy lethal weapons as the US does.

100% healthcare availability: in New Zealand every citizen and permanent resident receives free or very low cost healthcare, though there is a waiting list for non-emergency surgeries and some procedures. Treatment for “accidents” is fully covered, even for tourists. Private insurance is also available. In the US, only a fraction of the population is covered by public programs and tens of millions of adults have no health coverage at all. (Reference) Over 13% of US adults have no health coverage. (Reference) It is not unusual for Americans — even if they have insurance — to be bankrupted by their medical bills, and uninsured Americans may not seek medical care because they simply can’t afford it.

Much less spent on healthcare per person, with better results: New Zealand spends only about a third per capita of what the US spends on healthcare. (Reference) And yet New Zealand life expectancy is significantly higher and infant mortality is lower than in the US. Universal access to basic healthcare is why.

Higher life expectancy: New Zealand, males 80.5, females 84. US, males 76, females 81. (Reference). On average people live 3 to 4 years longer in New Zealand, likely due to much lower rates of violent crime and basic healthcare being readily available for everyone.

Lower infant mortality: New Zealand, 4.4. In the US, 5.8. (Reference). That’s what you get when everyone has access to basic healthcare; fewer babies dying. It’s not complicated.

Just as many physicians per thousand people: New Zealand 2.2, US 2.3. Basically the same. (Reference) It is not difficult to find a doctor in New Zealand. In the US there is a shortage of physicians in many rural areas (Reference) because doctors can make much more money in urban/suburban regions and because a higher percentage of Americans in rural areas have no health insurance. If the US had universal health care, rural Americans would have greater access to physicians.

Commitment to fighting climate change: Prime Minister Jacinda Arden has committed to a 2050 target for New Zealand to be carbon neutral, meaning zero net emissions (Reference) and has introduced legislation to make that happen. (Reference) In contrast, the US is going backwards (CO2 emissions increased in 2018) with the current administration withdrawing from the Paris Agreement, pushing for more fossil fuel extraction, enabling polluting industries, rolling back EPA rules that would have increased vehicle energy efficiency, appointing former fossil fuel lobbyists to cabinet-level positions, and…I could go on and on.

Initiatives to promote electric vehicles: New Zealand has made steps towards making EVs more affordable (Reference), as has the US though the Federal EV tax credit is limited and there are political forces that want it eliminated. Some US states offer EV incentives, but most do not. The current American administration is actively anti-EV.

Acknowledging past injustices: New Zealand has made serious efforts to reconcile with its history of discrimination of the native Maori. (Reference, Reference) Regrettably, the situation in the US with Native Americans is still deplorable. (Reference, Reference) The history of slavery in New Zealand consists of Maori tribes taking captives as spoils of war and making them slaves; the British colonists outlawed slavery and made all Maori British subjects with equal rights in the 1840 Treaty of Waitangi. Of course discrimination against Maori did not disappear with the signing of the treaty, nor did slavery. But over time, it did. When the US declared independence from Britain, much of its economy was based on enslaving Africans, a legacy that the country still struggles with today, as evidenced by recent tweets from the #lyinglunatic-in-chief and the lack of condemnation of same by almost every political leader of his party.

Government transparency and corruption level: Transparency.org takes on the difficult task of ranking governments on those parameters. In 2018 New Zealand ranked #2 out of 180 countries, one point behind #1 Denmark, the least corrupt country in the world; essentially, a tie. The US ranked #22. (Reference)

Good coffee: New Zealand seems to have good coffee wherever you go, including offering a coffee innovation I have not seen elsewhere; a tasty coffee “bean bag” that brews up a fine cup when all you have is hot water and no coffeemaker of any kind. No coffee is grown in New Zealand — it is all imported, like in the US — but they sure know how to brew it right! 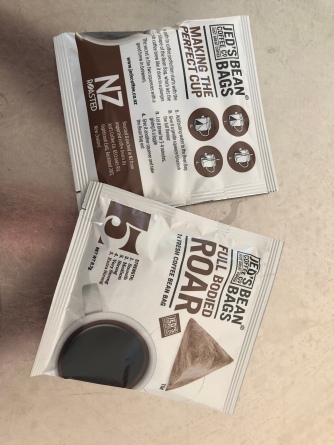 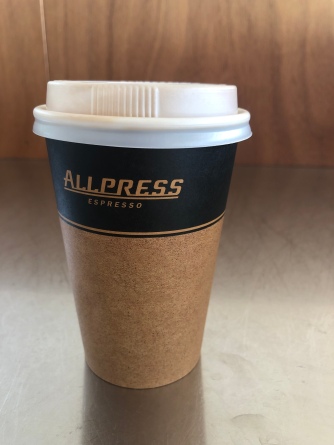 Polite drivers: I find New Zealand drivers overwhelmingly courteous (with of course the very occasional exception). My favorite road sign there reflects that, it is “Merge Like a Zip”, which is an instruction to alternate when merging: you go, then I go, then you go. And it works. It reminded me of the Canadian road sign asking drivers to “Please alternate” when merging. In the US such signs simply state “Merging Traffic”, and you’re on your own. 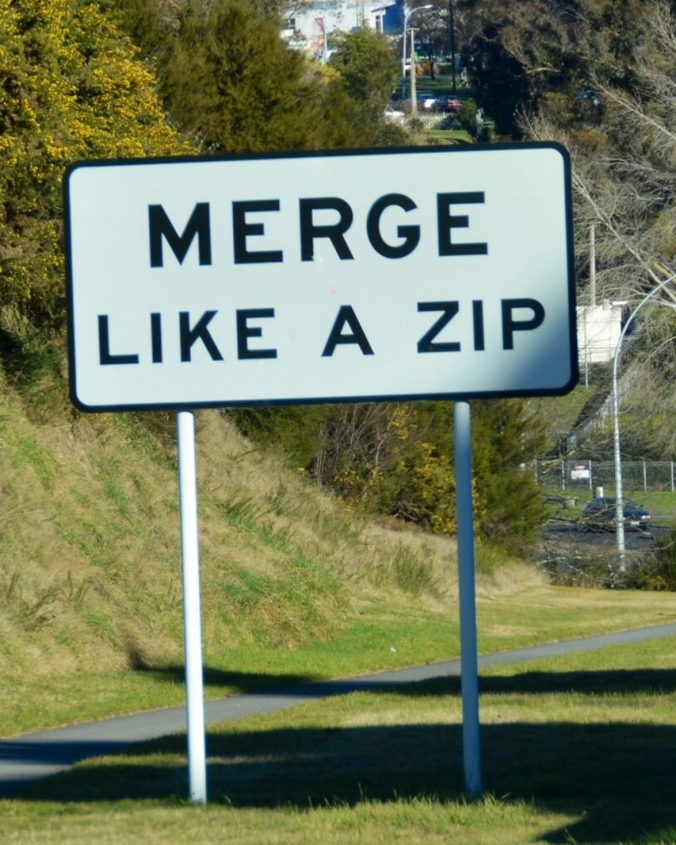 Most unusual, but very nice: at a New World supermarket in Warkworth we happened to be there during a “quiet hour” period for noise-sensitive autistic people to do their shopping.

Incredibly tasty aquafarmed mussles: they are delicious when “brined” (not cooked) in water with salt and a bit of sugar, or cook them a variety of ways. Green-lipped mussels are farmed in the ocean off both the North and South Islands. They are very nutritious and produce no pollution since mussels are filter feeders and don’t need any added food; they get everything they need from the ocean they live in. I really could not get enough of them; NZ$8 for a container that was enough for both of us!

I could extend my list, but I’ll leave it here for now… 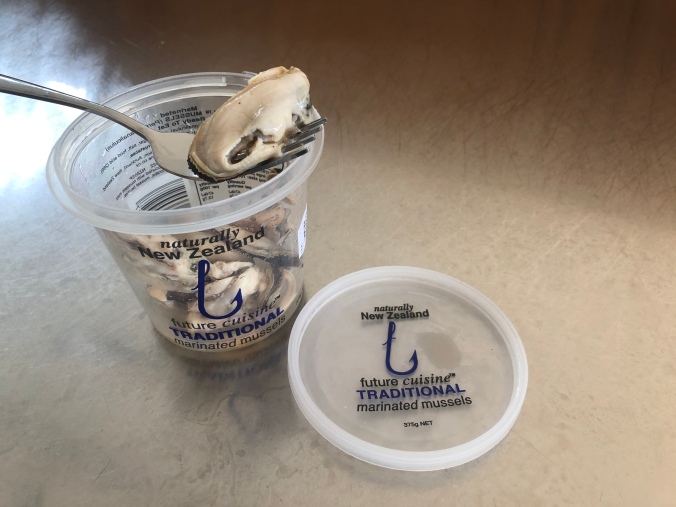