Our fourth day in Piha we decided to make the 35km trip to Bethell Beach, which requires taking a circuitous route inland because the road on the coast at Piha does not continue north. When we arrived at the Lake Wainamu Car Park (GPS coordinates -36.8837055, 174.4526419) there was only one other car there. Looking at the Waitakere Ranges Open Tracks Map we decided to try the Te Henga Walkway along the coast, as it appeared there would be plenty of great views of the ocean. That track started on the other side of the road so we set off and in a minute came to the small bridge that crosses the Waitekere River.

Time for a new plan. The river was flowing swiftly and it was clearly too deep to wade across safely. No worries, as the Kiwis like to say, we turned around and to took the track in the opposite direction, to Lake Wainamu. Before we even got back to the road we met a chatty local lady out for a walk who told us that the bridge had been washed away last year and no one knew when it was going to be fixed. We said we were headed to the lake instead, and she replied “Oh that’s a fair trot, have fun!”

And it did turn out to be a great hike! That track crosses the Bethell Dune on the way to the lake. Some people we had talked to a few days earlier recommended seeing the dunes but I thought to myself “A sand dune? I’ve seen dunes before.”

I was wrong. I had never seen a dune anything like the huge Bethell Dune. It seemed to go on and on… 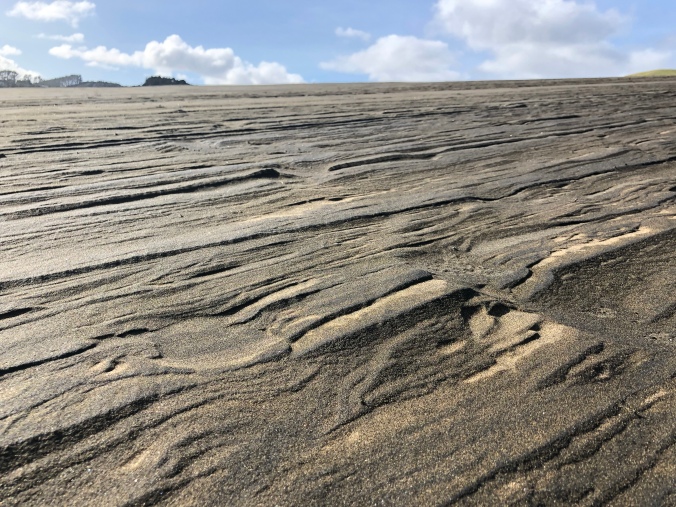 The dune appeared to cover an area of about two square kilometers and the sand looked just like what we saw on the beach at Piha. My Gaia GPS app showed the track as continuing along the south side of the river, but the dune descended steeply down to the river and while I could see footprints in the sand, the walking looked difficult. So we stayed high up on the dune and took an easier and more direct route towards the lake.

It appeared that the lake was formed when the dune height increased and blocked the valley, creating a lake. A stream cut through the dune to our left and that defined the lake level. To avoid crossing the stream we took the well-maintained track along the south side of the lake, stopping for lunch when we found a nice view. Enlarge that image and you will see in the distance the dune that blocks the valley. 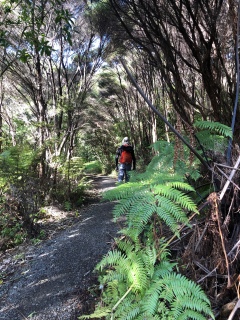 I did not research the Lake Wainamu Track thoroughly in advance and only later discovered that there is a fine waterfall just minutes beyond where we stopped for lunch and then turned around! Here is a photo of what we missed (photo courtesy of Lee Hyde). 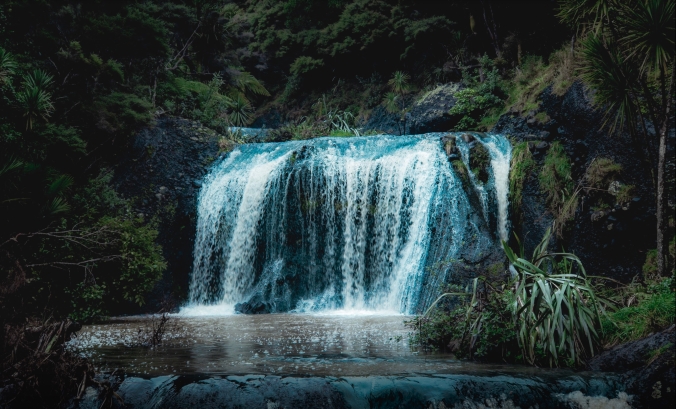 We returned to our car, not realizing that we had missed a wonderful waterfall. However, our day was not over. On the drive to Bethell Beach I had noticed an interesting sign, “Large Kauri Walk”, on Road 24 before we turned back onto Piha Road. We found it on our drive back and stopped in the very small parking area on the side of the road. Not really knowing what to expect but hoping to see some big Kauri trees, we put our packs on and crossed the road to the boot cleaning station, like the ones at the start of all the open tracks in the Waitakere Ranges, designed to prevent the spread of Kauri Dieback disease.

When the track ended abruptly in about 30 meters at a viewing platform, I realized not just why it was called a “walk” but why it was named “Large Kauri”! Directly in front of us was an enormous Kauri tree, which I estimated had a trunk diameter of about 2.5 meters (7.75 ft). 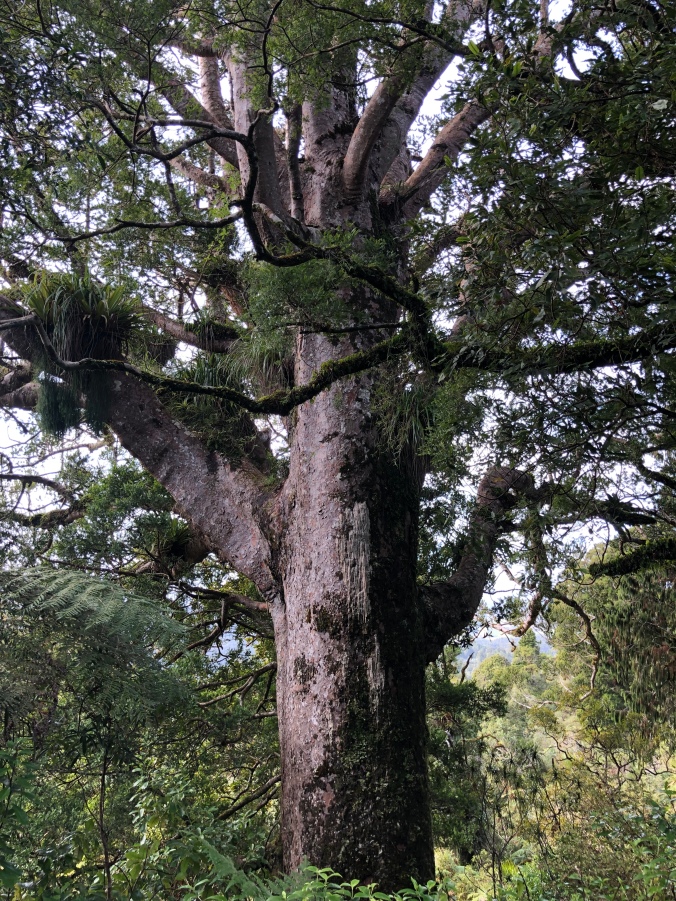 The Kauri tree is native to New Zealand and is by far the largest (though not the tallest) tree species there. The tree we were staring in awe at was in fact not considered particularly large; the largest known Kauri currently standing is the Tane Mahuta tree which has a trunk diameter of 4.92 meters (15.24 ft), about twice as big as this tree. But that tree pales in comparison to the largest documented tree which had a diameter of 8.54m! It was lost to a fire in 1890.

It took less than a century for over 90% of the Kauri trees that were present just before the first European settlers arrived in New Zealand to be cut down by 1900, a statistic which reminded me of how California redwood forests were decimated in the 19th century. Kauri wood was prized for shipbuilding and all kinds of construction, from buildings to furniture, and much of it was exported.

The first protected Kauri forest area was established in 1952 in the Waipoua Forest region. Currently there are multiple protected areas, including the Waitakere Ranges where we were standing staring at this magnificent tree.

Those multiple protected areas should be sufficient to unsure the species survival. But in the 1970’s a new threat to the Kauri tree was identified. Called Kauri Dieback disease, it was was caused by the fungus Phytophthora agathidicida, an Oomycete plant pathogen that can be spread on wet soil attached to animals and via water in the soil. Sadly, the tree we were admiring showed evidence of infection; whitish material oozing out of the bark. 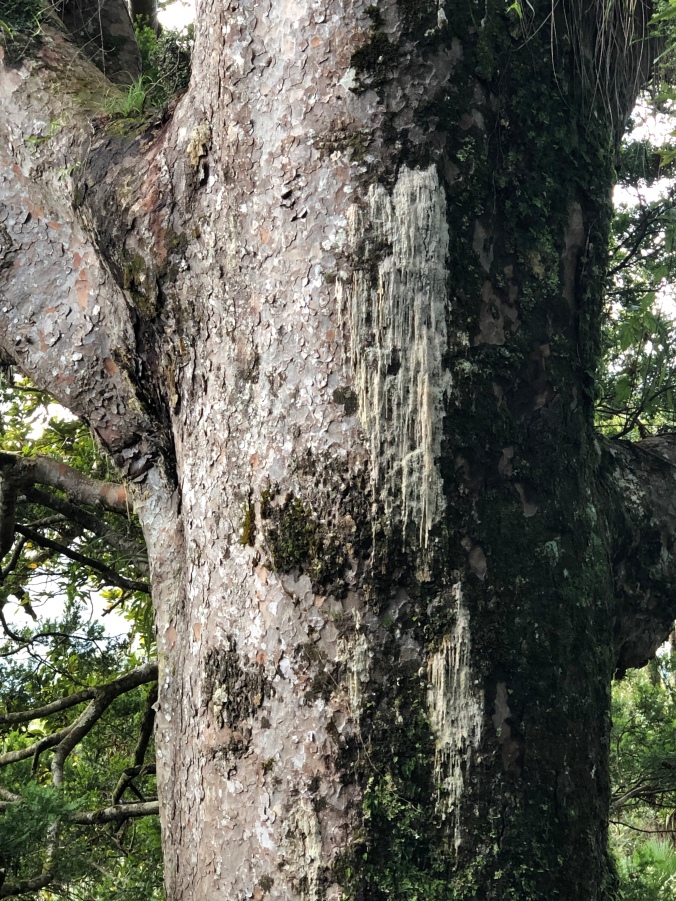 “Animals” includes humans of course. In 2018 most of the tracks in the Waitekre Ranges were closed to hikers to try to limit the spread of the disease, and boot cleaning stations with a spray disinfectant were set up at the start of every track that remained open. The government is making a serious effort to limit the disease, but it will be many years before it can be determined if those efforts are successful.

The Kauri tree shouldn’t just be preserved because it is strikingly large; it is considered a  foundation species because it modifies the soil below its canopy to create a unique community of species that depend on it.

Here is my video of the tree we saw.

One thought on “A Giant Dune and a Massive Tree”