Even 10,486km from home (6,515 miles, but I’m thinking in metric on this trip) we are traveling “electric”, renting a VW e-Golf for traveling around the North Island. More about that car, and driving on the left hand side of the road, in a future post.

For our first hike in the Auckland area, we took a quick ferry ride from the Ferry Terminal (completed in 1912) to Rangitoto Island, a volcano which rose from the ocean about 600 years ago. Witnessed by the Maori people who were living in the area — they called it ‘Nga Rangi-i-totongia a Tamatekapua’ — over the next few centuries the island grew in size to 3,800 hectares before the eruptions stopped and the lava cooled. Now almost completely covered with vegetation, there are still areas where plants have not yet obscured the lava. 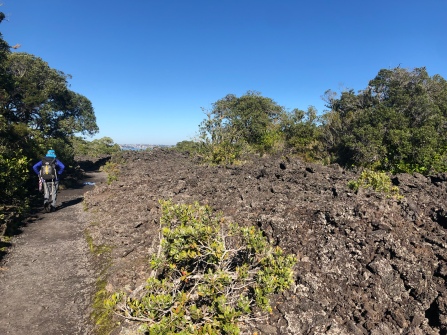 Lava field before the plants take over

Vegetation grown over the rocks

From the wharf, the Rangitoto Summit Walk track to the 260 meter summit is an easy, well-maintained trail, with constructed steps for the steeper sections. It’s a spectacular view when you get there!

Instead of returning along the same trail, we took the Crater Rim Track along the western lip of the crater, descended to the McKenzie Bay Road, and used the Wilson’s Park Track to return to the Summit track. You have to watch carefully to see where Wilson’s starts on the left side of the road, as it is a narrow track and apparently not heavily travelled.

We saw no one on that track. Well, no humans. What we did see was a lot of fascinating flora and fauna! We heard the melodius Tui bird, watched North Island Saddlebacks foraging in the tree canopy, and observed a Fantail searching for insects on the ground; it would fly up several feet, drop back to the ground and then fan its tail and flick its wings to provoke insects to move so it could spot them and eat them.

We passed through a forest of tree ferns that we up to forty feet high! At home we recently planted a New Zealand tree fern in our yard; I hope it never gets that large. 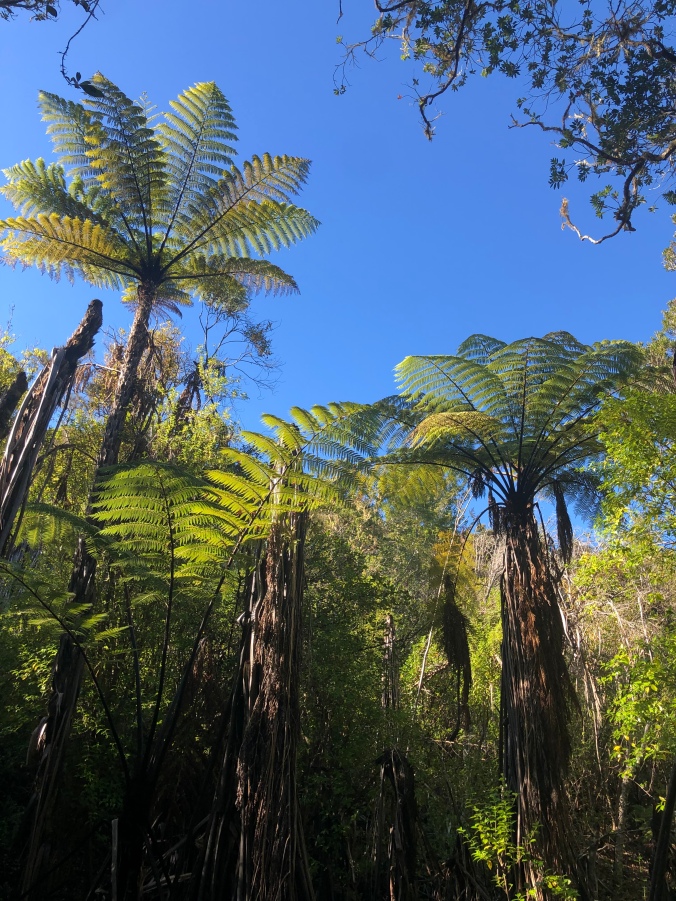 Even the smallest plants were intriguing: tiny mushrooms in a carpet of moss, larger mushrooms on a tree stump, and white lichens growing over dark lava rock. 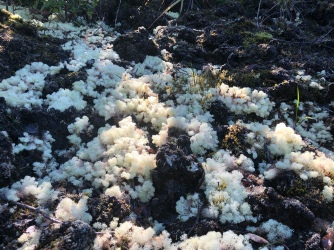 It was a fantastic hike on a beautiful winter day; 14C, clear skies, and a light breeze. Designated as a Scenic Reserve, the island is a protected area that the government works hard at preserving. In 2011 the island was declared “pest free” after a lengthy campaign to eradicate non-native animals such as possums, wallabies (from Australia), feral cats, rabbits, stoats, hedgehogs, Norway rats, ship rats, and mice. Those animals can destroy native vegetation and out-compete native animals. It is heartening to have a government that recognizes the value of preserving the environment for the benefit of everyone. 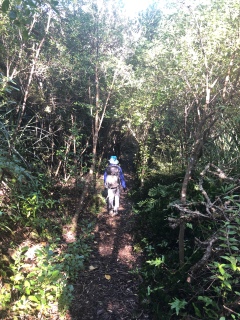 Next up: Hunua Falls: No Tourists in Wintertime!

One thought on “Volcano Hiking on Rangitoto in New Zealand”