Ano Nuevo State Park, home to one of the largest mainland elephant seal rookeries in the world, is only an hour drive from our house. We decided to take a winter weekend and visit the seals at the peak of their breeding season in early February while camping at the Costanoa KOA campground just a few miles away. We arrived on Thursday to sunny skies and our site even had a view of the ocean!

That afternoon we walked from the campground down to Hwy 1 and onto the local beach. 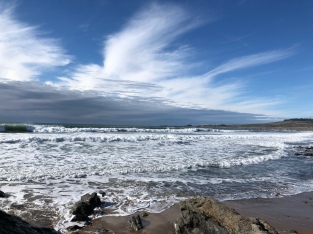 No one else was there, except rounding a corner we came upon this lone sunbather… 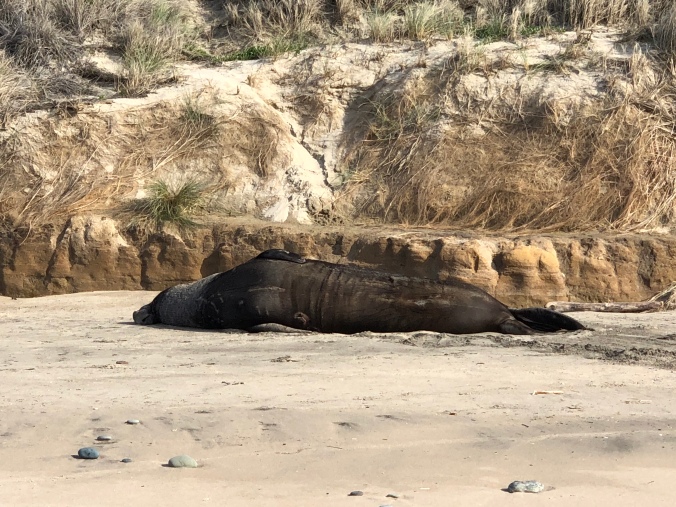 This male elephant seal was about 12 ft long and surely over 2,000 lbs. But he was not mature enough to have his own harem yet, so he had found a spot a few miles from the rookery to have a snooze, undisturbed. We lowered our voices and kept a respectful distance; at one point he raised his head, looked at us, and promptly went back to sleep.

We knew it was going to rain on Friday, which makes viewing the seals more interesting; they like cool, wet weather and are more active in that environment. We had signed up for a docent-lead tour in the Ano Nuevo nature preserve. Getting to the preserve requires a 1.5 mile hike from park headquarters, and as forecasted, it started to rain. Our docent was a likeable and talkative guy name Dave, ex Navy Special Forces, and self-educated elephant seal expert (though he wasn’t always accurate*). He led our small tour group through the dunes, near several young male seals who were too small to get past the big bull seals with harems, and then we were on top of a low dune looking out over several hundred seals. 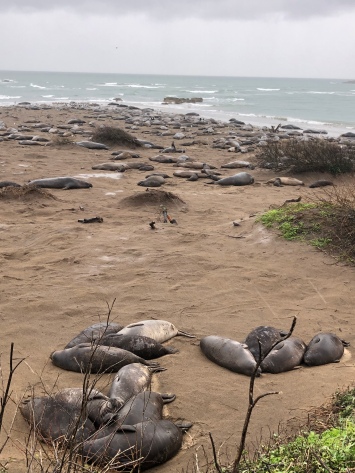 While my photos appear to show a lot of dead animals, in fact they were quite busy; males bellowing and fighting and mating, females that weren’t yet ready to mate protesting, pups calling for their mothers and mothers calling for their pups, all combining into a cacophony of sound, which along with the rain and high winds made for an exhilarating experience!

Saturday we joined our Sierra Club hiking group for an 11 mile, 2,300 ft hike in nearby Butano State Park. The trail leading up out of the parking lot was wet and slippery, but the morning weather was fair so no one complained. An extraordinary number of California red-bellied newts were out on the trails along with the usual complement of bright yellow banana slugs. At our late morning snack stop, we enjoyed the view looking towards Big Basin State Park to the east. 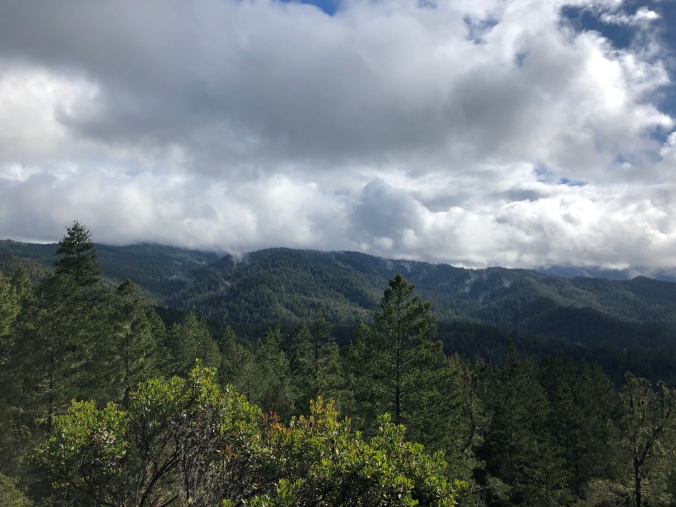 Just after lunch it started to rain when we were high up on an exposed fire road, but soon we were descending through redwood forest and barely noticed the rain.

Back at the trailhead we asked the ranger if we could drive farther down the road and check out the park campground even though it is closed in wintertime. She told us that recently a huge cedar tree had fallen and most of the campground was not accessible, so we weren’t able to see it. But based on online reports it is a nice campground in the late summer or fall when it’s warmer and there is less chance of the marine cloud layer being present. So we’ll be back to Butano and try it out!

Another local activity that we have done before is taking a tour of the Pigeon Point lighthouse which still has the original Fresnel lens in place.

* Dave the docent told us that elephant seals dive deeper than any other marine mammal. That’s not correct, and perhaps he misspoke and meant to say they were the deepest diving seal. Sperm Whales have been recorded diving to almost 7,000 ft** Cuvier’s Beaked Whales have been recorded diving to a depth of just over 10,000 ft***, while elephant seals are not known to dive deeper than about 5,000 ft. This isn’t just guesswork; scientists have fitted them with instrumentation that accurately measures their depth while diving.